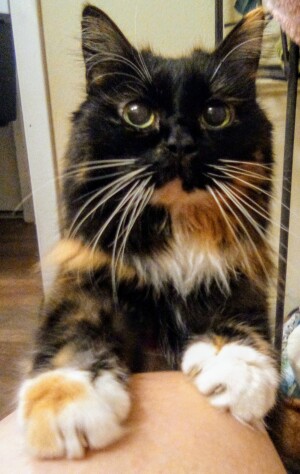 Christina Susan Eksted, age 72, was born on December 8, 1949 in San Diego, California and she passed into the arms of Jesus on March 26, 2022, in Seattle Washington after complications from heart surgery. Christina had lived in the Seattle area for approximately 43 years and for the last 2 years lived in Issaquah, Washington. She grew up in San Diego, CA, graduating from Kearny High School, in 1968, where she was involved in drama. After high school she attended Mesa College where she earned a certificate in Theater Arts. She then along with her friend William Gonzalez worked for the Old Globe Theatre where they were in charge of costumes. Her love of drama led to her landing an extra part in a Tyne Daly movie called, Face of a Stranger (1991), currently available streaming on IMDb; she had a non-speaking part as a homeless woman, appearing in a close up in the movie. In 1975, she and her husband at the time, Michael Hallinan, opened a book store named “The Unicorn,” in Myrtle Creek, Oregon. While living in Myrtle Creek she also worked for the News Review as a News Photographer. They sold the store in 1978 and moved to Seattle, WA. She attended Seattle Central Community College where she earned a certificate in Commercial Photography. She later attended The Institute for Movement Therapy earning a certificate in Movement Therapy. Over the years she worked at various places such as Kronos as a Regional Service Administrator, the Greater Seattle Chamber of Commerce as a Receptionist, the Institute for Therapy Movement as a Therapist and Instructor, J. K. Gill Co. as a Floor Manager, she was Self Employed at times as a Therapist and a Freelance Photographer, and she worked with Aglow International holding many positions but especially Board Member and Speaker. She earned her Bachelor of Arts in Organizational Management from Northwest University, graduating, Magna Cum Laude, in 2011. She went on to earn her Master of Arts in Psychology, Counseling Specialization in 2018. Christina loved to go to karaoke where she chose to listen rather than sing and she belonged to a group who regularly met for dinner. She loved her friends and family dearly. She is survived by siblings John (Sandra) David Eksted of Wenatchee WA, Paula (Brad) Adrian Kimball of Malaga WA, nephews Christopher Bryant Castle, Andrew (Sharon) Justin Eksted, nieces Kimberly (Casey Kirchner) Michelle Castle, Sadie Michelle Castle, nephew-in-law Harold James Kimball, 4 great nephews, 5 great nieces, 2 great great nephews and 4 great great nieces. She gave her heart to Jesus in 1988 and her family has peace knowing that she now resides in Heaven along with her father Paul Adrian Eksted, mother Luella Mae Eksted, sibling Timothy Walter Eksted and nephews Timothy Peter Eksted and Paul Michael Castle. She is loved and missed by all who knew her.

--Info: Bring potluck dish and a chair, soft drinks will be provided, Karaoke will be available (Issaquah Celebration)